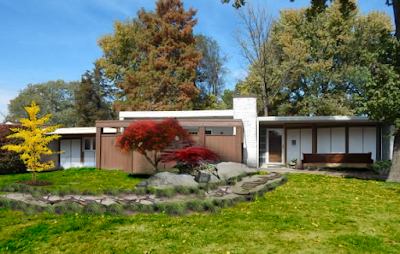 We're not ready this year, but we hope to begin phase one of remodeling our home that was originally built in 1948 and based on prairie-style architecture. The home that we've named Lyndonhouse was built by a World War II veteran named Lyndon Long who passed away several years ago. I believe he was influenced by Frank Lloyd Wright to some degree and this is what attracted me to the home when I bought it in 2016 after my divorce when I finally wanted a place of my own. My wife Jennifer and I hope to add a bit of Japanese architectural influence to the home and also intend to introduce some Niwaki style Japanese garden landscaping.

This is a first draft pre-visualization done up in Adobe Photoshop of my home. We hope to add a bit of Japanese architectural influence and Niwaki influenced landscaping. The mailman walks through our yard each and every day to deliver the mail and then proceed over to the nextdoor neighbor's home. We're figuring to actually add a true pathway in the yard and maybe some stones. Still not sure about that. I do want to remove several bushes and replace one area with a giant church pew. And the other with a Japanese Red Maple. I also want to add a gingko tree... which is my favorite tree. The outside of the home is going to be reworked and painted differently to appear more Japanese home style rather than the dull battleship gray the home is currently pained.

That front fenced in area is actually a fenced in porch we already have that we've turned into a beer garden.

Anyway, this is a pre-visualization of the remodeling that we want to do to the exterior of the front of the house down the road.