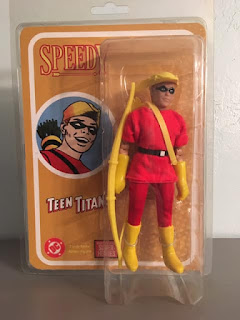 When I was a kid, I collected various action figures that included GI Joe Adventure Team, Star Wars, Mircronauts, The Six Million Dollar Man, Evel Knievel Stunt Motorcycle, The Lone Ranger and Tonto, and Mego action figures. I had a blast as a kid.

I am an avid G.I. Joe collector that still collects vintage and reproduction 12" action figures. I also like to kitbash my Joes. I always loved my Mego figures, but traded most of them around 1995 for some vintage G.I. Joe Adventure Team figures that I didn't have when I was a kid.

In 2010, I picked up a reproduction Green Arrow figure by Mattel. For those that know me, Green Arrow has always been my favorite comic book character. I never picked up his sidekick Speedy, that was released as part of the original Teen Titans figures back in the day. Well, this past month, I picked up a reproduction Speedy figure after all these years. I kitbashed and customized him to be more comic book accurate and I also designed my own Mego-like backing card that uses Nick Cardy artwork.

The original Speedy figure (and the reproduction figure) placed Speedy in a pair of shorty-short speedos like Robin and Aqualad. That was all wrong. I corrected it and gave him custom long red pants and a short sleeve red t-shirt like he had in the comics.

I know that I shouldn't get into any more collecting, but I have recently got the bug and I've been picking up a few reproduction Mego-like figures and I've been doing some customizing. I thought I would share a picture from my hobby. This was my first. I've also picked up a few other figures, but I'll hold those back to showcase at a later time.

¡W💥W! Scott!
This customized Speedy inspires me: I appreciate your eye for detail🎯 & your recipe. Well done!
-Mike