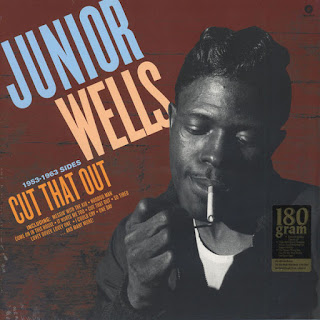 This will be a first in a series of record reviews that I'll offer here on my blog site that I'll do from time-to-time. As many of my family and friends know, I have a deep love for music -- especially classic rock and blues.

I also have had a long appreciation and love for collecting my music on vinyl going back to my teenage years and when I used to work in a record store back in high school. I collected both vinyl and CDs. Many times, I'd buy certain albums on both formats. I tend to enjoy listening to vinyl at home on my turntable and listening to CDs in the car. With that said, in recent years with the resurgence of vinyl, I tend to just buy vinyl LP records now only. The exception might be buying both formats for certain artists like The Beatles and their solo work, David Bowie, and Sting.

There is something very spiritual feeling for me to listen to music on vinyl. Perhaps the warmth of the needle falling in that groove. The zen-like way I remove carefully an album from the cover and place it on the turntable, listen to the whole album, and then turn it over to the second side. All the while, reading the liner notes and admiring the art and photography of an album cover. Appreciating the packaging, admiring the record label, etc.

Over the past few years, I've picked up quite a bit of reissues from the Spanish record label called WaxTime. I've mainly picked up about B.B. King reissue albums from WaxTime and this is my first Junior Wells album. These are pressed on 180 gram vinyl and have excellent covers in English. I've read some reviews of some albums reissued on the WaxTime Record Label and some reviewers hate the sound quality, believing the albums were cut from audio CDs and not the master tapes or whatever. Well after the whole Universal Music Group fire fiasco where they admitted this past year that hundreds of thousands of songs were destroyed in blaze in 2004, I think we'll be fortunate to get any reissues and they will probably come from alternative means. What I ultimately want to say, is that I love the reissues on WaxTime Record Label and think they're doing an excellent job at reissuing hard-to-find blues albums.

I first heard of Junior Wells back in the late 1970's when I was a little kid listening over and over to my father's Blues Brothers album entitled A Briefcase Full of Blues when John Belushi, a.k.a. Joliet Jake Blues on stage, introduced the song "Messin' With the Kid" as a Junior Wells blues tune. Years later in college in 1991 when I went through my own personal blues music discovery phase, I first heard Junior Wells in his collaborations with Buddy Guy on the album Alone and Acoustic. I was blown away by that album and dug further to discover an earlier 1972 album Buddy Guy & Junior Wells Play the Blues that had they aforementioned "Messin' With the Kid" and the song "Man of Many Words" which was what the Black Crowes at the time took their hit song "Hard to Handle" from. Then there were a few other live albums the two did together until I discovered that Buddy Guy was a session man with Chess Records in the Sixties and was a sideman in Junior Wells Chicago Blues Band.

This album, Junior Wells - Cut That Out: 1953-1963 Sides, I picked up last week off an eBay "Buy it Now" purchase that cost around $13 sealed. Many of the WaxTime records can also be found for sale on eBay as a tip -- especially with these being imports. This album includes his first hit with "Messin' With the Kid" and other singles that Junior Wells recorded between the years 1953 - 1963. In one of the bold hype pieces on the back of the album, it has a quote from Rolling Stone lead singer Mick Jagger that exclaims, "Junior Wells was a great harp player. He was one of my influences."

This album collects singles from some of the independent labels that include Chief and Profile and the albums states these tracks are remastered. Junior Wells did indeed have a laid back approach to playing his harmonica and singing. While listening, what struck me was the youth-like sound of his voice with these recording compared to some later recordings he did with Buddy Guy in their collaborative albums that sounded much richer and deeper. I truly enjoyed this album, especially with tracks like "Cut That Out" and a song that I have heard Eric Clapton cover called "It Hurts Me Too".

So, for me, I did listen to the two albums back-to-back, and it made an interesting listen.