The James Bond movie ON HER MAJESTY'S SECRET SERVICE starring Australian actor George Lazenby is celebrating its 50th Anniversary this year. Originally released in 1969 by United Artists,  OHMSS scrambled to find a new actor to play British Agent 007 after fan-favorite actor Sean Connery departed the series and decided not to renew his contract and come back to the role.

From some reports, Connery got fed up during production of YOU ONLY LIVE TWICE and reportedly quit following a feud with the producer, thinking 007 had got boring and the actor was also dissatisfied with his salary. During the making of the film, Connery experienced his own form of agitating fan frenzy when Japanese fans would even follow him into the bathroom with cameras and wanting his autograph. He had had enough.

An international search for a new actor to replace Connery for the coveted role was launched. Actors Michael Caine, Dick van Dyke, and Terence Stamp (amongst others) were considered for the role. But the new 007 ended up going to 29-year old Australia model George Lazenby. To prepare for his audition, the story famously goes that Lazenby dressed for the part by wearing a Rolex watch like Bond and went to the same Savile Row suit shop to collect a suit ordered, but not picked up by Sean Connery. During his audition, the non-actor accidentally punched a professional wrestler acting as a stunt man in the face which impressed producer Albert Broccoli.  He got the part and would even do most of his stunts other than some of the skiing parts because of the insurance company.

A great documentary came out in 2017 called BECOMING BOND which tells the story of George Lazenby getting the part, and ultimately walking away after doing only one Bond film. A trailer for the film is below.

I've watched this film about a dozen times in my lifetime. Many fans seem to think that this would have been the perfect Bond film had Sean Connery starred in it. I beg to differ after all these years, as I think about where Sean Connery was in his life during that time period making SHALAKO and THE MOLLY MAGUIRES. I just couldn't see him bringing the emotional intensity and edge to the film that Lazenby excellently did.

From the opening scenes of the film, Lazenby claims the role all his own with his opening fight scene against some thugs as he meets Bond girl Teresa Draco played beautifully by AVENGERS actress Diana Rigg after saving her from an attempted suicide. We would learn that she prefers to go by the name Tracy when she famously states later after meeting him under less stressful situations, "Teresa is a saint... I'm known as Tracy."

One of the greatest strengths of OHMSS is that it closely, probably more than any other Bond film, follows author Ian Fleming's novel very, very closely. The film is a culmination of Bond going after SPECTRE organization leader Ernst Stavro Blofeld, in this film, brilliantly played by actor Telly Savales.

For help in tracking down Blofeld, Bond makes a deal with  Tracy's father, Marc Ange Draco. The mission takes Bond to Switzerland to an architectural extravagant lair on top of a mountain called Piz Gloria, where he must pose as genealogist Sir Hilary Bray to find out the secret plan of Blofeld. The facility is filled with many many beautiful women undergoing "spectial treatment, while also being guarded by several henchmen as well as lead henchwoman, Irma Bunt.

ON HER MAJESTY'S SECRET SERVICE also includes some of the greatest chase scenes, whether it be cars or Bond escaping down a mountain slope on skis. Backed with perhaps my favorite instrumental film score to any Bond film conducted by John Barry, the music accentuates the action.

The film has one of the most climatic endings to any Bond film as Agent 007 with some help of his allied commandos storming Piz Gloria via helicopter insertion in an action-filled battle. Even Tracy isn't helpless, as she fights off a henchman. Unfortunately, Blofeld ultimately escapes.

While the films follows many of the Bond film tropes, this film had some heavy lifting to do with Bond going through a range of emotions. Before Daniel Craig showed us a sensitive Bond in the modern day, we see a James Bond fall in love with Tracy, and at the end of the film, he asks her to be his wife. Shocking Bond fans everywhere who didn't read the novel beforehand, our bachelor womanizing James Bond is finally settling down, even Miss Moneypenny shedding a tear towards the end. What happens next as the couple speeds off to their honeymoon is the most tragic moment in Bond's life as an escaped Blofeld and Irma Bunt drive by their car, firing bullets at the automobile as Bond is pulled over on the side of the road -- shockingly and ultimately killing Bond's new bride.

Lazenby's delivery is heartbreaking and perfect in his reaction that continues to haunt Bond fans as he quietly whispers, "It's quite all right. We have all the time in the world."

Lazenby rejected the chance to appear in six more Bond movies as part of a contract woth around $1 million, before essentially being blacklisted by the industry after earning a reputation for being difficult.

“I had advice that James Bond was over anyway. It was Sean Connery’s gig and, being in the 60s, it was love, not war. You know, hippy time. And I bought into that,” Lazenby explained in an interview around the time of the documentary.

What Bond fans got was a one-hit wonder. Lazenby only played Bond the one time. And he did one hell of a job. We could only wonder "what if?" he had stuck around to play Bond. In 1971, Connery returned to the role, overweight, graying, and not fully vested in the lackluster DIAMONDS ARE FOREVER. Afterwards, we would get Roger Moore in the 70s and part of the 80s when he took the role in 1973 with LIVE AND LET DIE.

As for me and my reaction to this film, I used to say that THUNDERBALL was my favorite Bond film all my life. Perhaps that is the 12-year old in me who loved the underwater scuba diver battle scenes. Of course DR. NO, FROM RUSSIA WITH LOVE, and GOLDFINGER are top notch Bond classics... but the Bond fan in me... the guy that read all the Ian Fleming novels, watched each and every Bond film a gazillion times, the old guy that I am now about to turn 50 in two years himself.... well, after all this time, I've changed my mind and I do think that ON HER MAJESTY'S SECRET SERVICE is my favorite Bond film with favorite Bond soundtrack of all-time.

I don't know if I even want to answer "Who is your favorite James Bond actor?" any longer. Each and everyone of them did a hell of a job. Including Lazenby, who I think is closer to the James Bond that I imagine in my head now when I read Bond novels, whether the original Ian Fleming books or some of the newer books written by the likes of Anthony Horowitz in FOREVER AND A DAY or even Sebastian Faulks in DEVIL MAYCARE.

George Lazenby is James Bond. I loved Lazenby in the role and appreciate his portrayal and this film more as I have aged and remained a Bond fan. The only post script I have is that I still wished he would have starred in more Bond films, but I will appreciate the heck out of this film for what it was and remains to be as it is one of the best -- now my personal favorite -- Bond film of all time. 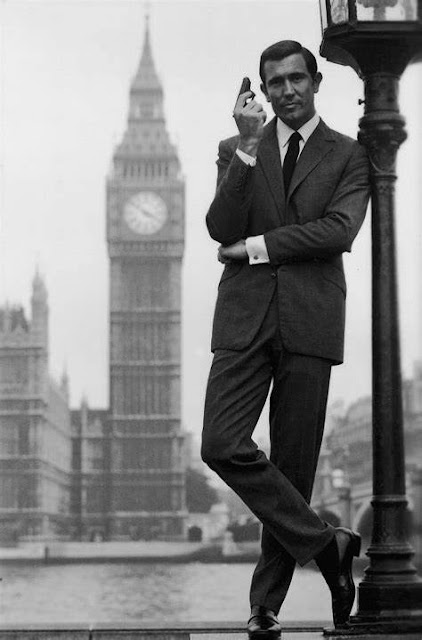