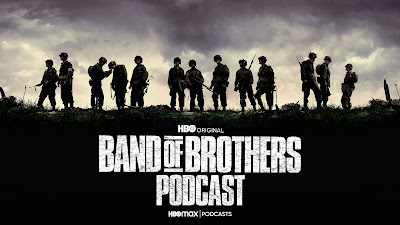 I just re-watched BAND OF BROTHERS for the umpteenth time. Each year, I find myself annually revisiting this 10-part HBO original series based on Stephen E. Ambrose's best-seller, and executive produced by Steven Spielberg and Tom Hanks. This landmark series recounts the story of "Easy" Company, 2nd Battalion, 506th Parachute Infantry Regiment, of the 101st Airborne Division, starting with their jump training at Camp Toccoa, Georgia, while following the unit through their airborne landings in Normandy, Operation Market Garden, the Siege of Bastogne, and on to the war's end at the Eagle's Nest.

This week, HBO has released as special 10-week long 20th Anniversary Podcast that revisits the series. The prologue included an interview with Tom Hanks, and while I type this, I'm listening to the podcast for episode one "Currahee" that features an interview with Ron Livingston who portrayed Captain Lewis Nixon.

For those of you like me who love this series, I highly recommend the free podcast. You can learn more at https://www.hbo.com/band-of-brothers/podcast.