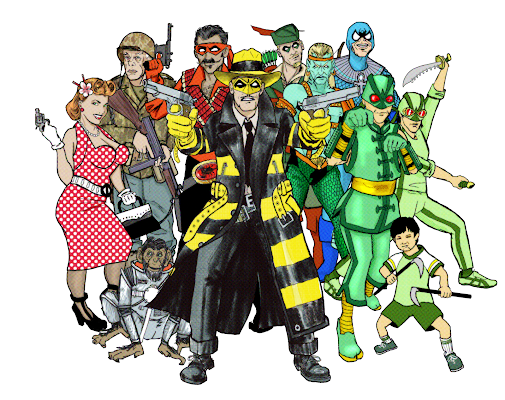 THRILL SEEKER COMICS™ are a series of stories about a ragtag group of heroes fighting evil in globe-spanning adventures. At the center of these two-fisted tales is the Dust Bowl era vigilante known as THE YELLOW JACKET: MAN OF MYSTERY™, who pursued by lawmen, is conscripted into THE STAR-SPANGLED SQUADRON™ to battle Axis Powers during the outbreak of World War II. Alongside THE EMERALD MANTIS™ and other colorful characters encountered, their enduring mission is carried on for over a century by a generation of successors crushing tyranny and protecting their world.

Welcome to the official webpage of the independent comic series written and drawn by Scott McCullar and published by Bandito Entertainment. Next year marks the 20th Anniversary of the Pulp Action and Adventures series and we're preparing to release new material.

In the meantime, be sure to pick up the THRILL SEEKER COMICS ARCHIVE COLLECTION on Amazon.com.