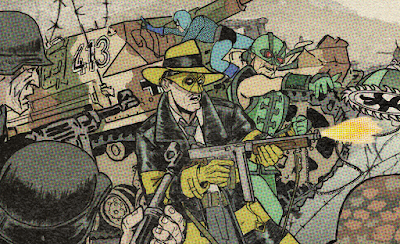 Happy Thanksgiving Weekend to all!
I’d like to welcome newcomers joining the THRILL SEEKER COMICS Facebook group in recent days. With the release of the upcoming INDIEVERSITY comic book – a guidebook to the varied worlds of the independent comics multiverse – that the THRILL SEEKER COMICS Universe will be featured inside as one of the worlds spotlighted of the Independent Comics multiverse, I expect that we might get a few new visitors who may want to explore and find out more about THRILL SEEKER COMICS.
I thought I would give an update today of what is going on with the relaunch of the THRILL SEEKER COMICS series. As I mentioned in the last update, the new year 2022 will mark the 20th anniversary of the first THRILL SEEKER COMICS story that debuted in SHOOTING STAR COMICS ANTHOLOGY #1 where readers were introduced to the Golden Age EMERALD MANTIS, the SACRED SCARAB, and the infamous YELLOW JACKET: MAN OF MYSTERY in a short story.
Well, I can reveal a little bit of news in what I hope will be an exciting update here on “WHAT’S NEW!”…
THRILL SEEKER COMICS is returning in 2022 with brand new stories in this year of celebration that will feature the return of our old friends, including the aforementioned Yellow Jacket: Man of Mystery and the various eras and characters to bear the name of the Emerald Mantis. There will also be an introduction to a new cast of characters as this world expands in these upcoming adventures for 2022. For the time being, most of these projects and what will be released must remain secretive until release time gets closer. As of today, I already have a handful of these brand-new stories 100% completed with finalized art ready for the printer. I’m also completing one story over these next 10 days and then I have another story featuring a brand-new character debuting in the Thrill Seeker Universe to finish by Christmas. It is a productive and exciting time for me and I wanted to share that good news in this update.
Ever since “lockdown” began with social distancing due to the worldwide virus, I have had a chance to reflect on my own personal life work balance and what matters and goals were important to me. I’ve realized with this upcoming 20th anniversary of THRILL SEEKER COMICS debut with Shooting Star Comics, I have some dreams painfully left undone when it comes to this independent comic book series of mine that I’ve wanted to continue to do for so long. I’m not trying to make excuses, but life threw me some curveballs this past decade that made it difficult for me to work on new tales, but while things are still crazy in the world of ours, much of the drama and obstacles that I was previously dealing with have been put behind me. I am now several months now engaged in new work for THRILL SEEKER COMICS.
I realize that the time is right for me to revisit these old friends and get back into working on new comics. Since summer, I’ve been busy working about four hours a day (outside of my day job) on working on these new THRILL SEEKER COMICS stories and art. (Remind me to talk about in a future update how “biphasic” sleeping patterns have literally opened up a new window for me to work on these projects in the middle of the night with all efficiency). I’ve completed two previously abandoned projects already. I can report that I have 34 new pages of work completed in these last few months. I also have a tight publishing schedule with several THRILL SEEKER COMICS projects planned out that I am currently working on. I am successfully happy to say that over the last 100+ days, I have kept on schedule with the new workload and met my self-imposed deadlines to prepare new material for next year’s relaunch. My excitement level is high and my creative juices are flowing. Earlier this year, I purchased a Wacom Cintiq Pro digital drawing pen and monitor that has revolutionized the way that I work and has led me to work more efficiently with my time and manner in which it takes me to draw and produce new art.
I admit that I have wrestled with my thoughts on what to say or share publicly with all of you about relaunching THRILL SEEKER COMICS with new material as we’re still several months out from things be ready for distribution. I’ve been busting at the seams to share the news, but I don’t want to be premature on announcements of upcoming projects that are still 4- to 6- to 12- month out so that any excitement and momentum wanes by that time when things are ready, nor do I want to overpromise and not deliver on anything. I want to make sure work is completed. My focus has been on the work and not the hype. I want to have “everything finished and in the can” all ready to go before I start revealing and then immediately and/or very soon afterwards be able to promote and provide the availability of these new adventures for you. Does that make sense?
So with that note, I think I will make my next big update come out between Christmas and New Year’s Day. I promise next month that I will have some examples and begin to share at lease one thing that is on the horizon for the new year and 20th Anniversary celebration.
All the best!
Scott McCullar
Posted by Scott McCullar at 11/27/2021 03:36:00 PM